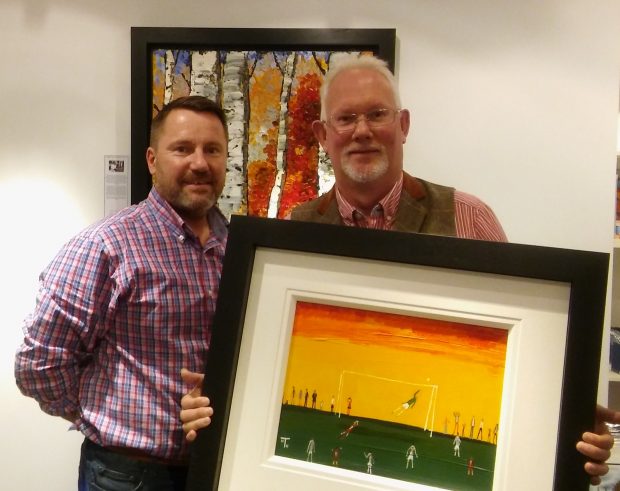 Art publisher and great all round friend of ours Mike Baggs popped into the THH Gallery to catch up with the team. As always it was as if he had just been here only five minutes before.

During his visit the Shot Stopper caught his eye and well, it had to head home with him. He said, “I love the simple way the action has been captured in the painting. 12. I have been taking two (one in the beginning of the day and one at evening time) https://precisionlife.com/valium-diazepam-online/ 5mg Diazepam throughout the previous 5 years. It has worked goof for me. I have not changed the dose and have had no reason to expand it. Before I began to use this drug, I would actually tremble when I would get apprehensive. I don’t feel it in anymore when I take it, however don’t get restless and am ready to with the choices that I can’t make up when I’m so apprehensive. I love Tony’s work, I always appreciate his naïve colourist way of telling a story, capturing a moment in time or from memory, it’s a magical gift.

“After all we all played in parks, grasslands and back streets. Our band of brothers spent many hours honing our football skills and lifelong friendships.

“It will hang nicely on my wall and remind me of my time knocking the doors with my pals.”