Mackenzie Thorpe was born in 1956, the eldest of seven children. His early years were spent in a small terraced house in Middlesbrough town centre. His father worked as a labourer and his mother as an auxiliary nurse. Life for the Thorpe family was, at times, a struggle but no different to that of most of their community.

His formative years were spent playing in and around the streets and back alleys of terraced houses. Derelict, bombed-out properties provided an exciting playground for Mackenzie and his uncle Lawrence – three years older and a protective and guiding influence in Mackenzie’s life.

He acknowledges mixed emotions about this period in his life. He remembers the strong feeling of community spirit, the strength of individual characters, the warmth and humour that flourished in the face of adversity, in the most unlikely of settings. He has also not forgotten the loneliness and isolation, the fear and the darkness that was ever-present. The vivid reality of these barely faded memories is apparent in some of Mackenzie’s works.

The need to draw was obvious from an early age; he would seek out and create with whatever raw materials he could find. His driving force was always to draw. He did not, could not, question this need. It is a need that remains with him today.

Mackenzie is one of those rare artists who are completely inseparable from their work. His restless energy and his passionate concern for humanity are as evident in his free-wheeling conversation as in his paintings and drawings. Whether he is depicting one of his notorious ‘square sheep’, a group of burly men hunched over their dominoes in a smoky pub or a fantasy Wild West shoot-out, his work speaks to you as decisively and compellingly as if he had slapped you on the shoulder. There is no pretension, no aloofness, just the urge to explore and communicate a deeply felt emotion. 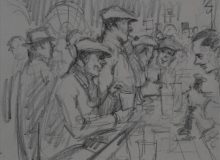 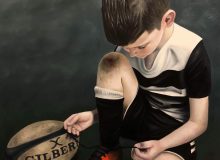